It was a hot and shrewd early August morning. I remember waking up knowing, instinctively, that today was going to be the day that I was going to take the largest leap of my life.

As I got into my car, geared with a hot brew of coffee ready to tackle on another school year with my staff and students, that nagging voice in the pit of my stomach was still trying to creep out of my vocals.

But She did that morning.
She escaped.
She got out.

Out on that first breath;

She condensated in my exhale into tiny droplets of solid that I can now see as a cloud, as a fog, obstructing my clear vision.

She just wanted to break away, to break free from the world to be spiritually unbounded. She knew she would have to give up a lot, but that was her planned lesson for the day: To be candid, to sacrifice the sanctuary of fear for the unknown, for the cloud, for the fog.

And so, when the fog evaporated, I found myself at the staircase of my future. And just like that I was summoned back into my body, into my reality, needing to make a choice: 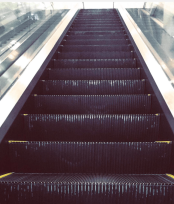 Do I take that first step on that conveyor belt or do I stay right here, admiring the view, accepting the nauseous view of the looped rotating assembly chain in its constant cycle?

She had driven me to the staircase of my life.

Prime Yourself on Words